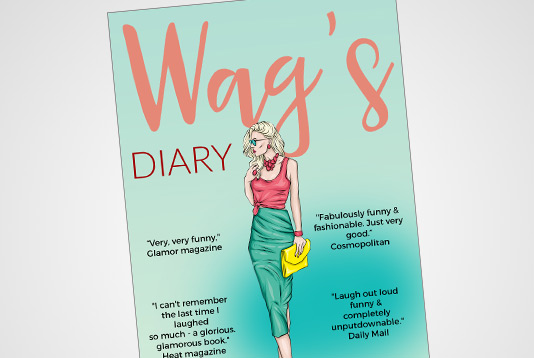 Meet Tracie Martin – Luton Town’s longest serving Wag.
There’s nothing she doesn’t like about her life. From the acrylic nails and Louboutin shoes to the terrifying amounts of fake tan. Tracie loves it. Being a Wag is all she ever wanted.

But as a new football season starts, she’s getting concerned…there is a breed of Wag at Luton who aren’t quite playing by the conventional Wag rules. Some of them have skirts so long they are almost covering their knickers, and their skins are natural in hue, rather than resembling the colour of a cheesy Wotsit. Do they know nothing about being a Wag?

There’s only one thing for Tracie to do…she decides to write the ultimate guide for wannabe Wags. She’ll explain that 99.7% of a Wag’s nutrition must come from Bacardi Breezers, and that her eyelashes must be so long that they enter a room two minutes before the rest of her.

She begins to write her blog, which is taken on by the Daily Mail…and overnight Tracie finds herself propelled into the limelight, achieving the A-list status she has craved for so long.

From Wembley to Old Trafford she is the talk of the town. But will fame and fortune bring Tracie more than she bargained for?

“A laugh a minute, tongue in cheek, homage to the wives and girlfriends of footballers everywhere who end up being discussed and analysed more than their husbands. I loved this. She’s a gorgeous, spray-tanned, killer heel-wearing Bridget Jones.”

*THIS BOOK IS RE-RELEASED. PREVIOUSLY PUBLISHED UNDER ALISON KERVIN’S NAME IN 2007*