“I cried with laughter. Mary is like everyone who’s ever tried to lose weight.”
Daily Mail.

“Believe it or not Mary Brown really is an adorable fat girl. and this book is utterly hilarious.”

“This is one memorable book with so many relatable and realistic characters.”

“Mary Brown is just wonderful, and I challenge you to read this and not be amused by the book. I am so looking forward to reading more of the Adorable Fat Girl series, and anything else that Bernice Bloom writes.”

“Bernice has a wonderful way with words and incorporates much into a few pages that makes you think about maybe your own issues or of those you see around you. A wonderful pick you up, feel good read.”

“I had to stifle giggles on more than one occasion.”

“It is the first book in a long time that actually had me laugh out loud!” 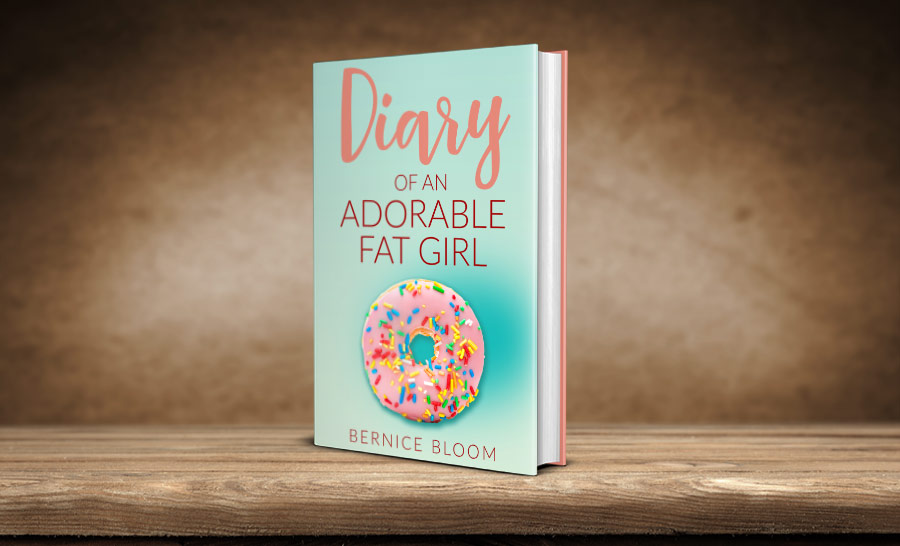 BOOK ONE IN THE SERIES. Mary Brown is funny, gorgeous and bonkers. She’s also about six stone overweight. When she realises she can’t cross her legs, has trouble bending over to tie her shoelaces without wheezing like an elderly chain-smoker, and discovers that even her hands and feet look fat, it’s time to take action.

But what action? She’s tried every diet under the sun.
This is the hysterical story of what happens when Mary joins ‘Fat Club’ where she meets a cast of funny characters and one particular man who catches her eye. This books is the first three books in the series all together. 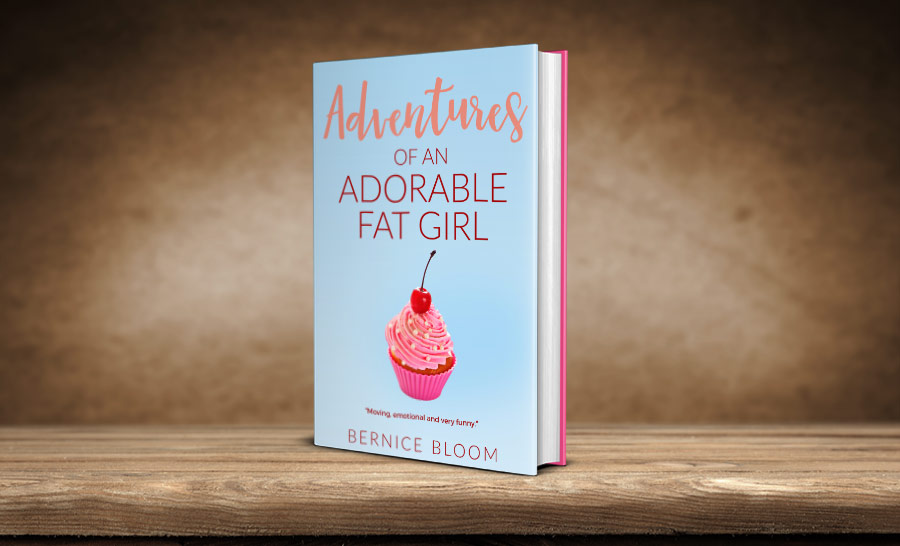 BOOK TWO in the “very, very funny series” (thank you Glamour magazine!) about Mary Brown – a woman who is funny, gorgeous and bonkers. She’s also about six stone overweight and can’t get into any of the dresses in Zara (she tries and fails. It’s messy!). Still, what does she care? She’s got a lovely new boyfriend whose thighs are bigger than her’s (yes!!!) and all is looking well…except when she accidentally gets herself into several thousand pounds worth of trouble at the silent auction, has to eat her lunch under the table in the pub because Ted’s workmates have spotted them, and suffers the indignity of having a young man’s testicles dangled into her face on a party boat to Amsterdam. Oh, and then there are all the issues with the hash-cakes and the sex museum. Besides all those things – everything’s fine… just fine! 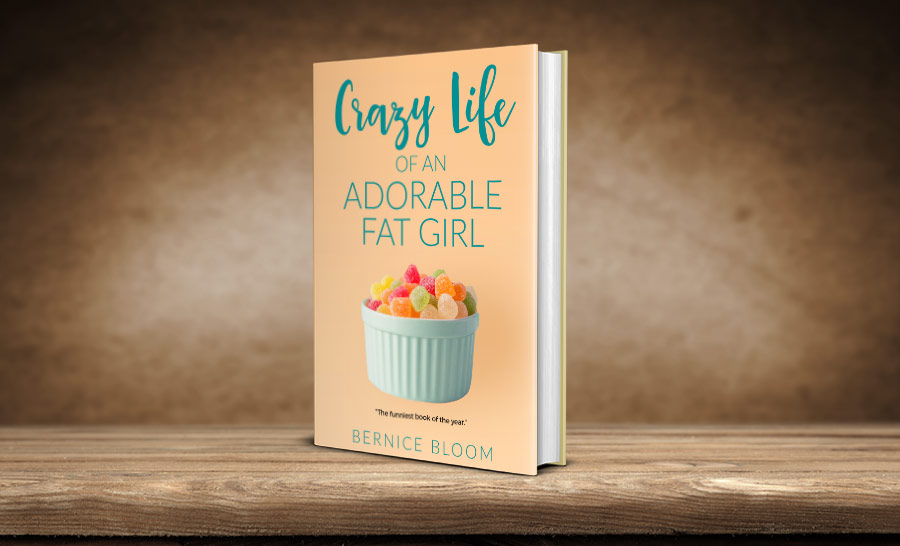 BOOK THREE. The series of mini books featuring Mary Brown continues with this epic adventure. Mary is funny, gorgeous and bonkers. She’s also about six stone overweight. When she realises she can’t cross her legs, has trouble bending over to tie her shoelaces without wheezing like an elderly chain-smoker, and discovers that even her hands and feet look fat, it’s time to take action. But what action? She’s tried every diet under the sun. Must be time for her to get herself enrolled in Fat Club. 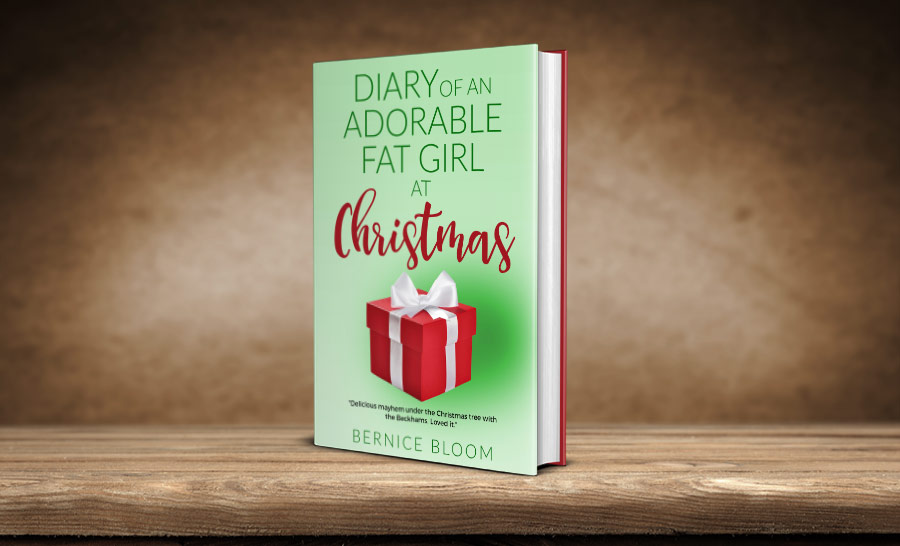 It’s BOOK FOUR and the Adorable Fat Girl’s favorite time of year, and she embraces it with the sort of thrill and excitement normally reserved for toddlers seeing jelly tots. Our funny, gorgeous, and bonkers heroine finds herself dancing from party to party, covered in tinsel, decorating the Beckhams’ Christmas tree, dressing up as Father Christmas, declaring live on This Morning that she’s a drug addict and enjoying two Christmas lunches in quick succession. She’s the party queen as she stumbles wildly from disaster to disaster. A funny little treasure to see you smiling through the festive period. 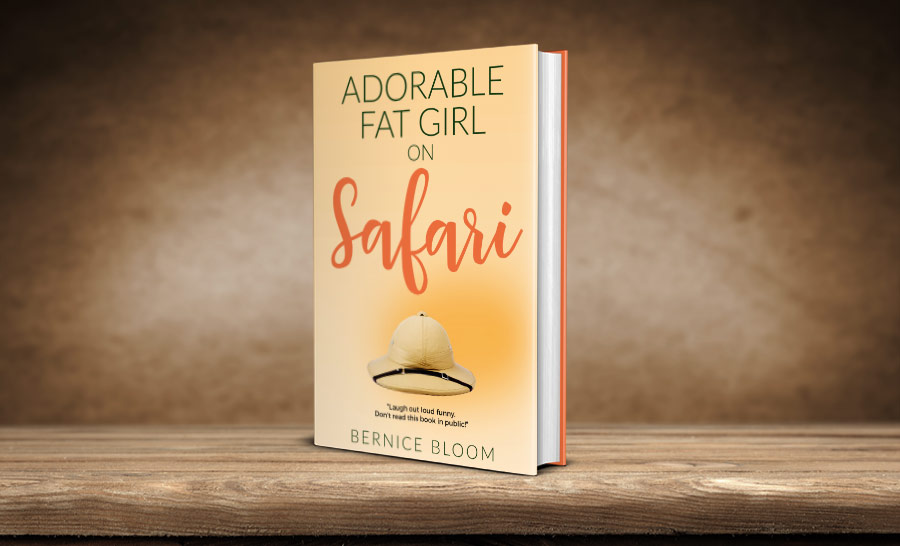 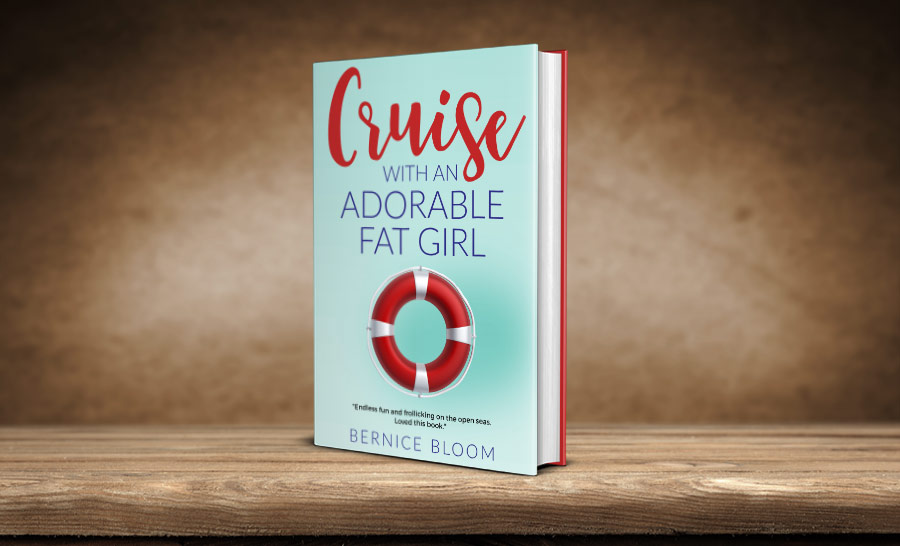 BOOK SIX takes place on the high seas as Mary Brown – our full-figured heroine – heads off on a cruise. It’s the trip of a lifetime…featuring eat-all-you-can buffets and a trek through Europe with a 96-year-old widower called Frank and a flamboyant Spanish dancer called Juan Pedro. Then there’s the desperately handsome captain, the appearance of an ex-boyfriend on the ship, the time she’s mistaken for a Hollywood film star in Lisbon and tonnes of clothes shopping all over Europe.
“Lovely, warm, life-enhancing and laugh out-loud funny,” Glamour magazine. 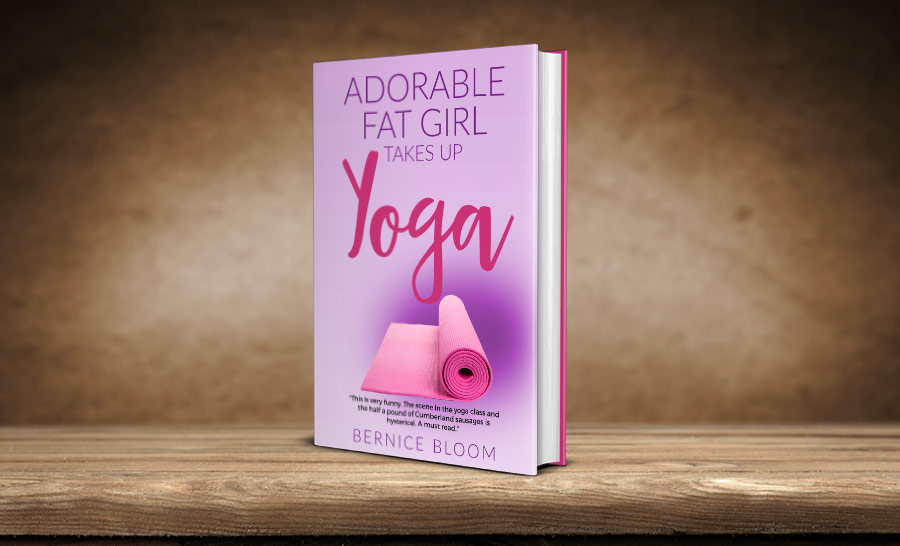 BOOK SEVEN: The Adorable Fat Girl needs to do something to get fit. What about yoga? I mean – really – how hard can that be? A bit of chanting, some toe touching and a new leotard. Easy! She signs up for a weekend retreat, packs up assorted snacks and heads for the countryside to get in touch with her chi and her third eye. And that’s when it all goes wrong. Featuring frantic chickens, an unexpected mud bath, men in loose-fitting shorts and no pants, calamitous headstands, a new bizarre friendship with a yoga guru and a quick hospital trip. “Adorable Fat Girl at her absolute funniest.” See www.bernicebloom.com for information about all of Bernice’s books. 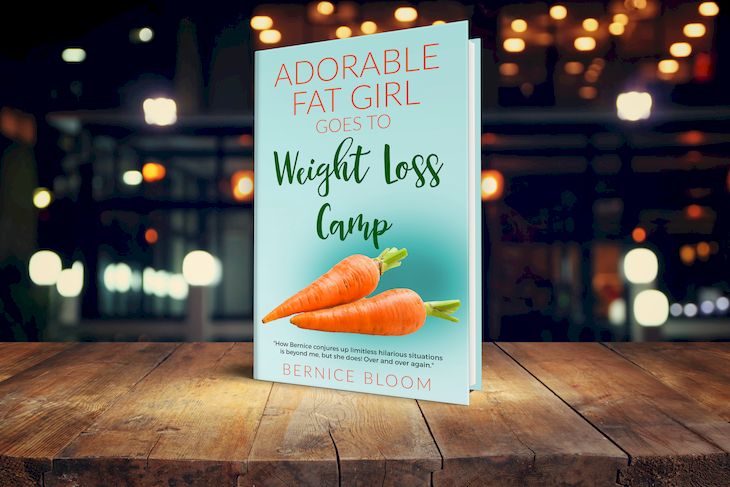 Mary Brown is back to her mad and crazy best as she heads to Portugal for a weight loss camp and discovers it’s nothing like she expected.
“I thought it would be Slimming World in the sunshine, but this is bloody torture,” she says, after boxing, running, sand training (sand training?), more running, more star jumps and eating nothing but carrots.
Mary wants to hide from the instructors and cheat the system. The trouble is, her mum is with her, and won’t leave her alone for a second… Then there’s the angry instructor with the deep, dark secret about why he left the army. The mysterious woman who sneaks into their pool and does synchronised swimming every night. Who the hell is she? Why’s she in their pool? Will the snacks prevent Mary from losing any weight at all? And what about Yvonne – the slim, attractive lady who sneaks off every night after dinner. Where’s she going? And what unearthly difficulties will Mary get herself into when she decides to follow her to find out… 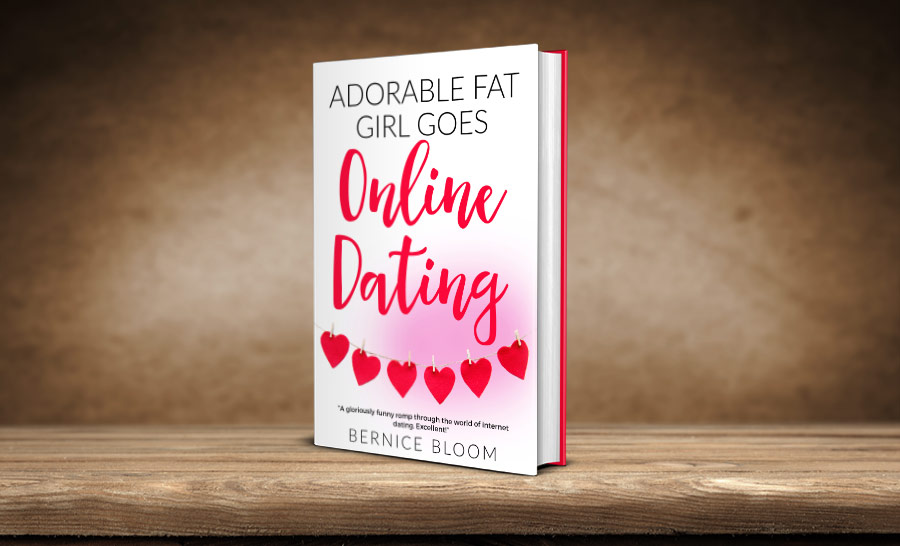 Mary Brown’s relationship with Ted is over, and she wants to find a boyfriend.
But where’s she going to meet someone new?
She doesn’t want to hang around pubs all evening (actually that bit’s not true), and she doesn’t want to have to get out of her pyjamas unless really necessary (that bit’s true).
There’s only one thing for it – she will launch herself majestically onto the dating scene.
Aided and abetted by her friends, including Juan Pedro – the flamboyant Spaniard who she met when he was a dancer in sparkly trousers performing on the cruise ship when Mary was on holiday – and best friend Charlie, Mary heads out on NINE DATES IN NINE DAYS.
She meets an interesting collection of men, including those she nicknames: Usain Bolt, Harry the Hoarder, and Dead Wife Darren.
Then just when she thinks things can’t get any worse, Juan organises a huge, entirely inadvisable party at the end.
It’s internet dating like you’ve never known it before… 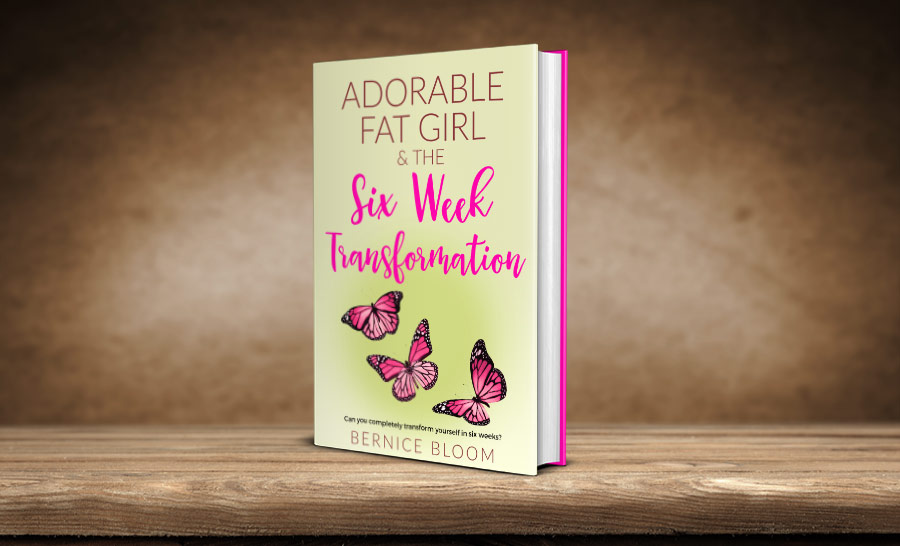 Can Mary Brown lose weight, smarten up and look fabulous enough to win back the love of her life?
And can she do it in just six weeks?
In this romantic comedy from the award-winning, best-selling, Adorable Fat Girl series, our luscious heroine goes all out to try and win back the affections of Ted, her lovely ex-boyfriend. She becomes convinced that the way to do it is by putting herself through a six week transformation plan in time for her friend’s 30th birthday party that Ted is coming to.
But, like most things in Mary Brown’s life, things don’t go exactly according to plan.
Featuring drunk winter Olympics, an amorous fitness instructor, a crazy psychic, spying, dieting, exercising and a trip to hospital with a Polish man called Lech. 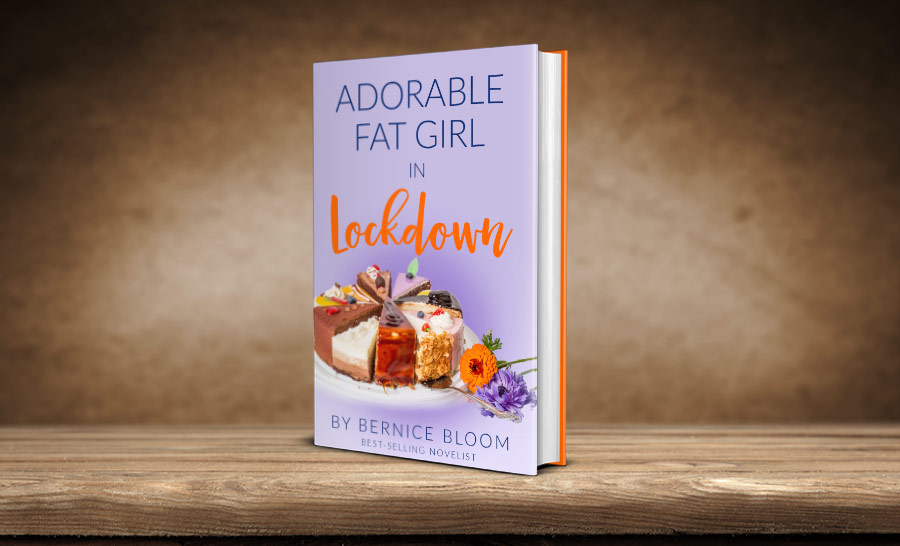 Mary Brown is in lockdown. She’s worn nothing but pyjamas for weeks, and is living on a diet of cake and wine. She’s rarely up before midday and spends her time watching every box set that she can get her hands on.
Then: she has an idea… instead of just eating the cake, why doesn’t she judge it?
She should organise a World Cup of Cakes. With Juan, her trusty sidekick, she sets up the competition with meticulous detail, and the whole thing goes viral.
Featuring: home dyed hair, talking to potatoes, Piers Morgan, internet shopping, an amorous neighbour, an angry ex-boyfriend and birdwatching. Oh, and loads of cake.
Fans of Sophie Kinsella and Marian Keyes will adore this book. 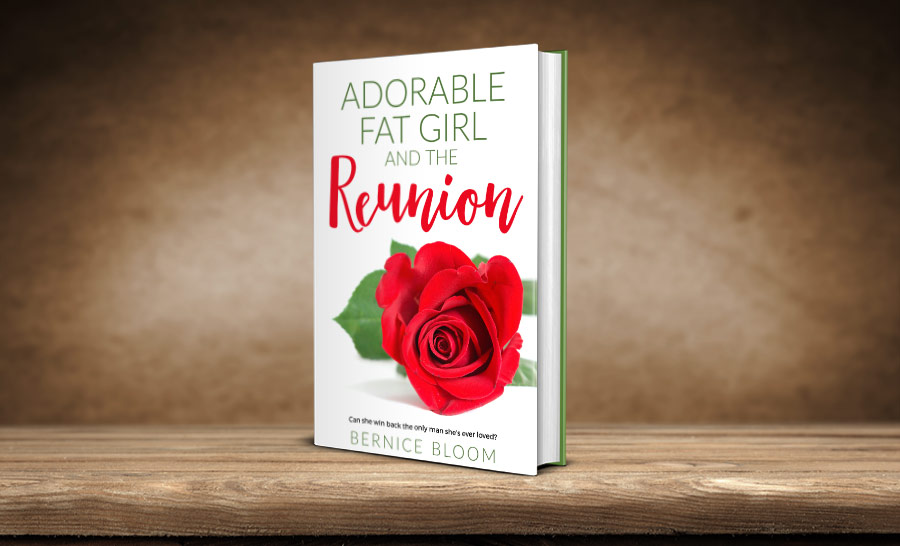 You join us at an exciting time…our gorgeous, generously proportioned heroine is about to be reunited with
Ted – her lovely, kind, thoughtful, wonderful ex-boyfriend. She is still madly in love with him, but how does he feel about her? Will love blossom once more? Or has Ted moved on and met someone else?
Featuring river boats, a wild psychic, sequined leotards, lots of gossip, fun, silliness and a huge, glorious love story…but is the love story about Ted & Mary or someone else entirely? 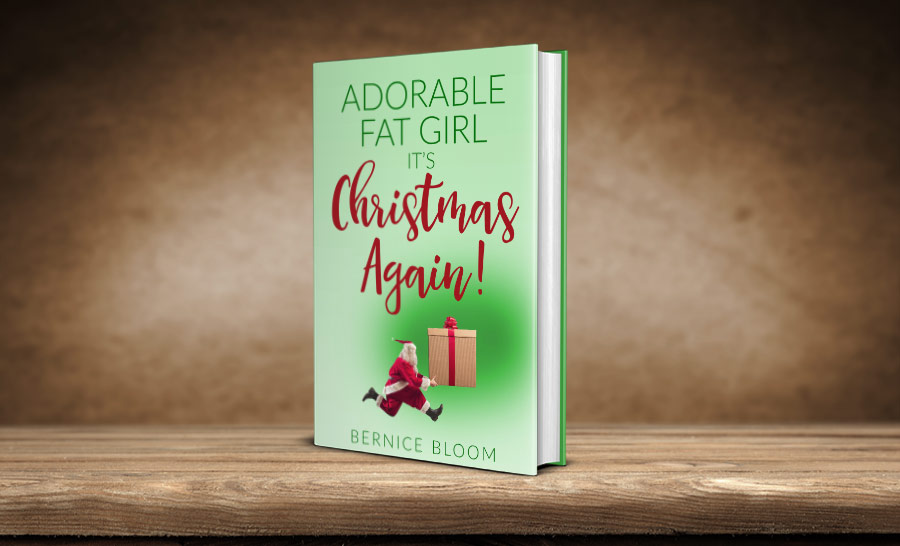 Mary Brown is determined to make Christmas a wonderful occasion, so she installs a Christmas Post Box of Wishes and Dreams in the gardening and DIY store where she works, and decides to make customers’ wishes come true… but it doesn’t go perfectly.
For a start, a good proportion of the notes she receives make suggestions that are positively vulgar. And physically impossible.
But she grants the wishes that she can…fixing up a date, delivering twigs and dealing with remote control mayhem.
Along the way Mary finds herself defending the elephant in the manger, reunited with the Beckhams as she heads over to decorate their house for their daughter’s Christmas party, and off to Lapland for a Christmas trip she’ll never forget.
To top it all off there’s a life-changing Christmas present from the man she loves…
‘It’s perfect Christmas comedy…Dawn French meets Bridget Jones. Wonderful.’ 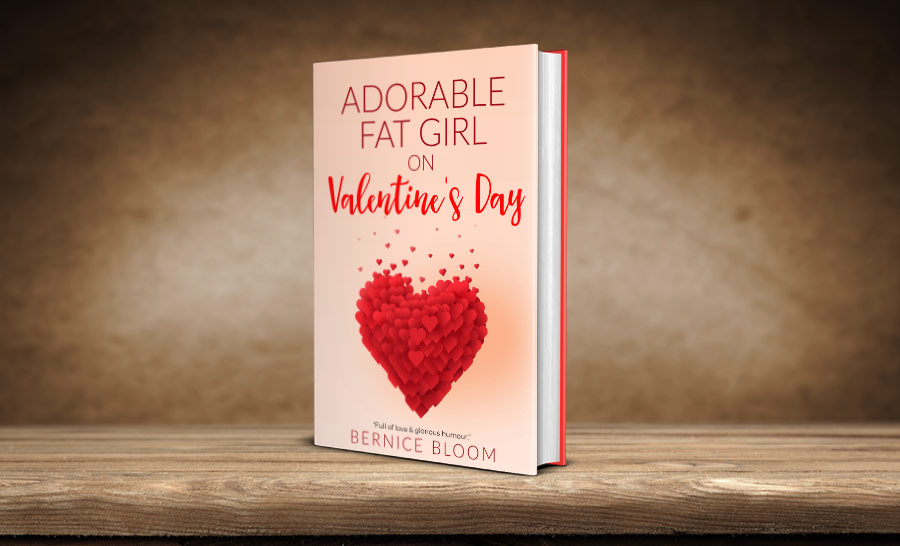 It’s Valentine’s Day. Ted had not proven himself to be the most romantic of partners, but this year it’s different. He has a rival for lovely Mary’s hand, and he ups his game and makes it the most incredible night ever. 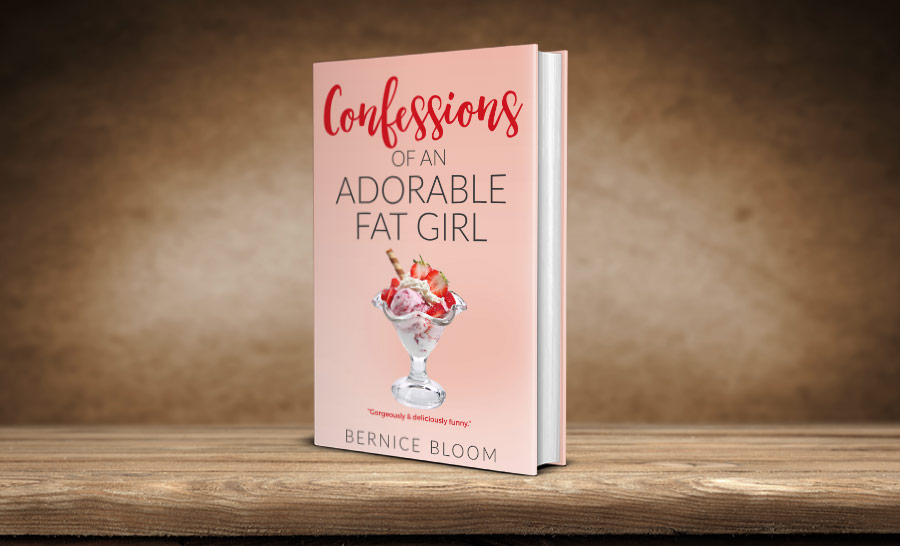 Mary Brown wants an adventure. She is bored at work, and she’s got some money in the bank, so she quits her job and heads off to ‘find herself’. Following the classic story of ‘Eat, Pray, Love’ – she goes off on a month-long adventure to work out who she is, and what she wants to do with the rest of her life. The result is a rip-roaring, crazy adventure which takes her to a starring role in the circus and pretending to be a zebra at a safari park. Mary’s not your average woman, and this is not your average adventure. Buckle up and prepare for fun.